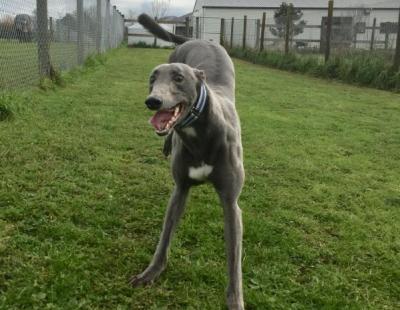 SEEKING A SPECIAL HOME FOR PRESLEY

Presley is bravely seeking a dog savvy family who live rurally/semi-rurally and can help guide him through the transition to pet life one paw at a time. He's fairly bashful at present, like a rabbit in the headlights, but has made big strides in such a short space of time and impressed us hugely.

Presley can be squirmy and wriggly when he meets new people. He feels worried and isn't quite sure what to do at first so he tries to fidget and fool around (a little bit like someone making jokes when they're uncomfortable!) However after the initial greeting is over with he is incredibly tactile, loves to be made a fuss of and to run around playing with you.

What Presley finds the scariest are new places and this is why we are seeking a rural home for him as this is closest to what he's familiar with and where he will feel safest.

We think he would benefit from part time care, at least initially while you build a relationship with him. He would absolutely thrive in a home where he can do fun training games with food and play to build his confidence. (Presley LOVES food)

Presley would benefit from and enjoy the company of another medium-large sized dog he can hoon around with; he feels more confident when someone else takes the lead. However this is not a deal-breaker and he would be fine with human company otherwise. He's particularly partial to large boy dogs and gets on well with other breeds who like to zoom and a little bit of roughhousing.

Presley may be able to live with gentle dog savvy kids, depending on introductions, but he cannot live with cats. He has been fine in paddocks next door to cows and horses.

GAP and COVID-19
Greyt news! Our GAP Events Team is Getting Bigger with New Volunteers in Canterbury and Auckland.
THE GIANT CATERPILLAR CRAZE!
END_OF_DOCUMENT_TOKEN_TO_BE_REPLACED