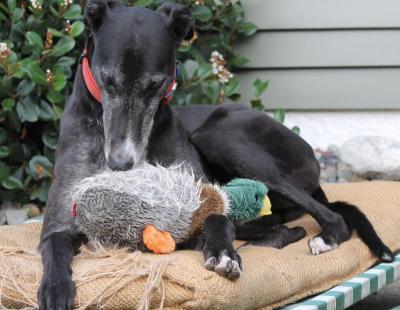 I couldn&rsquo;t believe my ears when Janet suggested I pick out a pup with a view to racing it. This was the first litter of greyhound pups I&rsquo;d ever seen; they were 3 days old and looked like kittens. Although it didn&rsquo;t take me long, I was quite deliberate as I reached over and selected &lsquo;my&rsquo; pup! He was immediately called Roddy with a view to naming him Black Rod after a very good horse my father trained.
It didn&rsquo;t take long to find two more partners to join Alan, Janet and myself and the Get Your Heart Racing Syndicate was ready to go &ndash; we just had to wait for Roddy to grow up.
When it came to registering his name, Black Rod wasn&rsquo;t available but Mr Meticulous had a ring to it. Roddy won his qualifying trial by 9 lengths and was paying 90c for a place and not much more for a win at his first start. He was slow away, took two more strides and was squeezed up then spat out the back, sideways. I didn&rsquo;t lose faith in him; after a lifetime with racehorses I&rsquo;m used to disappointments.
Racing Roddy was the best fun and Alan and Janet Hall did a wonderful job with him. He won 19 races, 15 seconds, 9 thirds and $38,359 in stake money. He raced against some exceptional dogs and I thought my heart would burst with pride the day he beat Little Mother after running second to her 5 times. He also had victories over Three Inch Nail, Visionary Man, and his litter and kennel mate, Freddy John. He never managed to qualify for any big races. I think Roddy read the word &lsquo;heat&rsquo; in the race book and managed to get into trouble just about every time.
Did I pick the best dog in the litter? Freddy John won the most money but Roddy won more races. I don&rsquo;t consider myself to be lucky, I&rsquo;ve never stood on a lucky spot, I won a bunch of dolls&rsquo; clothes as a child when I had a gun and a train set but I nailed it this time!
Although I miss him racing, I couldn&rsquo;t wait to get Roddy home as a pet. In my role with GAP, I felt it was right to have him temperament tested. He flew through the GAP testing and even showed he could live with cats. Roddy lives on a 5 acre lifestyle block in Otaki. He shares his home with Maxi the Taxi (champion sprinter, champion pet), Dynamic Keroma and Andrew the Brave (no, it&rsquo;s not a Craik Racing retirement home) and Shoot the Bacon, the only girl in our pack. He&rsquo;s a lovely pet, a real clown and great fun to have around. His favourite toy is &lsquo;Trevor&rsquo; a Mallard duck.
And do I have another greyhound in training &ndash; of course I do!