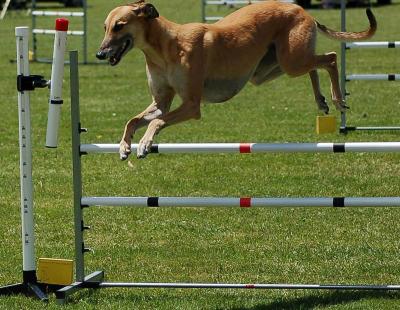 We are sitting writing this into our seventh week of having Priceless in our lives. We have always enjoyed a flutter on the horses or dogs and I (Rebecca) have had animals in my life for most of it, but never a dog. We had seen the GAP stands at various events and it has always caught our attention. We found ourselves in the position to have a dog through a change in circumstance so took the plunge with GAP - and unbeknown to us, friends of ours (Clare and Matt) were doing the same, (now with Gerry and Zing (Thrilling Zing))!!! Priceless was a bit weary of us to start with but with patience, consistency in expectations and letting her take her time she has found her feet, her personality has developed and WOW what an amazing greyhound! And in less than seven weeks! When Priceless clipped the tree a couple of weeks ago and we feared the worst, (silly hound gave herself a bad &lsquo;dead leg&rsquo;) we could feel our hearts breaking and realised just how much we loved her. This morning we were lucky enough to be in a safe open space so she could have some time off the lead in new surroundings, to see her racing towards us when called and so happy, well words can&rsquo;t describe it! Priceless is a part of our family now and we don&rsquo;t know what we did without her &ndash; thank you GAP!!

Priceless (Fancy Freda) has been with us nearly three years now and boy has the time flown by. It feels like she has always been with us! We did some basic obedience classes at dog school in the beginning, but Priceless wasn&rsquo;t really into it. She struggles to sit and will rarely lay down on anything harder than carpet &ndash; this generally includes grass.
I decided we would have a go at agility to give her something to think about. I thought we would toddle along in the beginner class forever. So just over a year ago Priceless and I had our very first agility class. It was a bit of a disaster. Going around the little jumps is much easier than going over them. Go through a tunnel?? Forget it!
We stuck at it and we were patient. Priceless is very wary of new things in general, but once she gets them she gets them. On the last night of our eight week course she scooted through a squashed up tunnel. I was ecstatic and she was pretty pleased with the amount of roast chicken she received.
Since then Pricey has taken to agility beyond my wildest dreams. Her confidence has improved in general and she keeps surprising me. She loves the dog walk and A frame and she is even going through a collapsible tunnel reasonably consistently. She is generally a very quiet very lazy greyhound but at class now she lights up. She gets so excited sometimes that she has to do zoomies around the ring and jump what gets in her way in the process. Which is amusing for everyone watching. Her focus is improving though and these episodes are happening less and less now.
About six months ago, to my astonishment, we were moved into the &lsquo;pre competition&rsquo; class. Not long after this entering our first competition became an actual achievable goal.
On 1st December 2013 Priceless and I had our first start in an agility ribbon trial here in the Wairarapa. Our first class started well but the atmosphere (and zoomies) got the better of us and we were disqualified when a tunnel was entered at the wrong end. I left the ring laughing and Priceless left the ring scooting around me with glee like she had just won the Silver Collar.

By the time we went into the ring for our second class we were both more relaxed. We had two whoopsies, a run past the collapsible tunnel, but quickly back to the front and through it. Then I wasn&rsquo;t quick enough and she scooted past a jump. We completed the course with faults but we were not disqualified, posted a score and I am so proud of our little Red Dog.