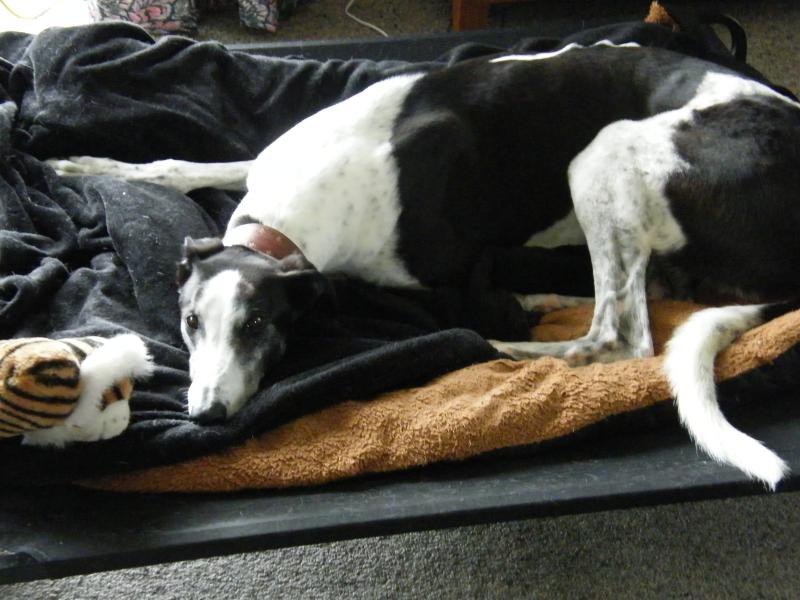 We begin with a touch of sadness as we had to say goodbye to our darling
Lace back in November.  She was a lovely girl and we miss her dearly.  Run
Free at the Rainbow Bridge sweet girl.

Tux took the loss badly so we made the decision to take on another hound.
Tux was really depressed and obviously so unhappy alone.  So into our lives
Came Mr Chino (now known as Dino).  What a character he is.

Dino is a constant source of amusement with his antics, he leaps higher
From standing than any other dog I have seen.  So much so that while
Dealing with a contractor a few weeks ago Dino leapt up and down at the
Door and promptly locked me out much to the amusement of the contractor.
Fortunately the garage door was open and I could get back into the house.

Tux still loves to annoy our chickens despite being told on countless
Occasions to leave them alone, he sneaks up when we are not looking and
Then charges at their coop.  Dino is one of the prettiest male dogs I have
Ever seen but he does suffer with the most obnoxious flatulence and we are
Amazed how something so beautiful can smell so terrible.

It has taken a while for Tux and Dino to really hit it off but it is a joy
To see them running together and walking side by side despite the odd nudge
From one or the other sending their pal flying to one side!!  Or Tux with
His constant neck nibbling stopping Dino in his tracks. They have at last
Even started to share a blanket now and again.

They are our joy, and the placque on our kitchen wall says it all, WE LOVE
OUR DOGS AND THEY LOVE US.