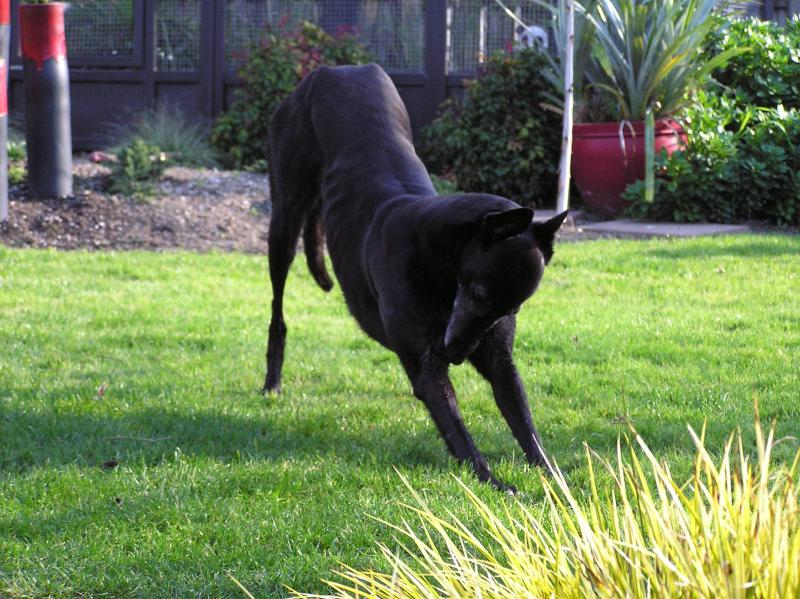 The house was deathly quiet in the small hours, just as it had been for many weeks. No crashing dog-door (sometimes thrown off its apparently "robust hinges€ and into the garden), no more distant sound of a frantic cat-claw scrabble up the fence and no more slobbering lip-flapping snore coming from the dog bed. My much loved Boxer, Romeo had passed away and the silence was a deafening bottomless pit.

It was two in the morning and here was a face staring at me from my computer screen. It was long and black with white eye-brows and very pointed ears which met in the middle. The photo had been taken at an odd angle, as if a would-be David Attenborough had lain on the floor and zoomed up the nostrils. The body behind was rather 'uphill' as a consequence and bony hips completed the portrait.

"Lilo is a gentle soul€ the script said, "who enjoys lying back in the sunshine without a care in the world. She will make a quiet and loving companion with few demands. Her days of being a full time mother are over and it is her turn to be loved and cared for€.

My heart strings got a hefty twang.

I had visited "We Need Homes€ many times and had been assessed as a Suitable Adopter. I knew when I saw that face and read the words, that this was The One.  Filling in the form right away, I went back to bed, hopefully content that "an angel€ was on the way, albeit a black one.

Later the next day my partner, Howard, exclaimed in shock, "A GREYHOUND !*!!?**??€ He was promptly given GAP books, web site, articles and a very dark look. After that he became a changed man.

On our excited way to Hampton Downs I began to imagine Lilo and then a worm of worry entered this idyllic scene.

€¦€¦€¦€¦`Lilo is nine years old. One of my Boxers, Lucy was nine, she had had pups too and her tummy had dropped - big time.  Her teats were so long that one day when she was lying on the carpet, my elderly mother mistook a nipple for a beetle and tried to pick it up. Lucy never did get over that. Maybe Lilo is arthritic, that photo was a little weird, and maybe the uphill body and the bony angles are real'.

I turned to Howard who had been reading all about 0-75kms in five seconds and comparisons with cheetahs in darkest Africa.

"Howard, you know that Lilo is nine, she will have a big fat droopy belly with very long teats and probably can't walk very well with arthritis and possibly has hip issues, after all she has raced, had four litters and fostered another litter at the same time. She is probably worn out and may not have long to live.€

He said that would be alright. He couldn't say much else really as we swung into Hampton Downs kennels.

After friendly introductions, Anna Marie went off to get Lilo. We waited, do they make Zimmer frames for dogs I wondered. Howard looked remarkably keen and obviously still had Cheetahs in mind.

When Anna Marie walked around the corner with the most beautiful creature imaginable, I was awe struck - like a stunned mullet in fact.  Slim, sleek, jet black, balanced, alert and graceful. Not a teat in sight. There was something of the Pharaoh hound about her - those pricked ears, that ancient wisdom, it was all there.  And that was the beginning of an amazing new chapter for us all.  Enter, Lilo, the Black Angel.