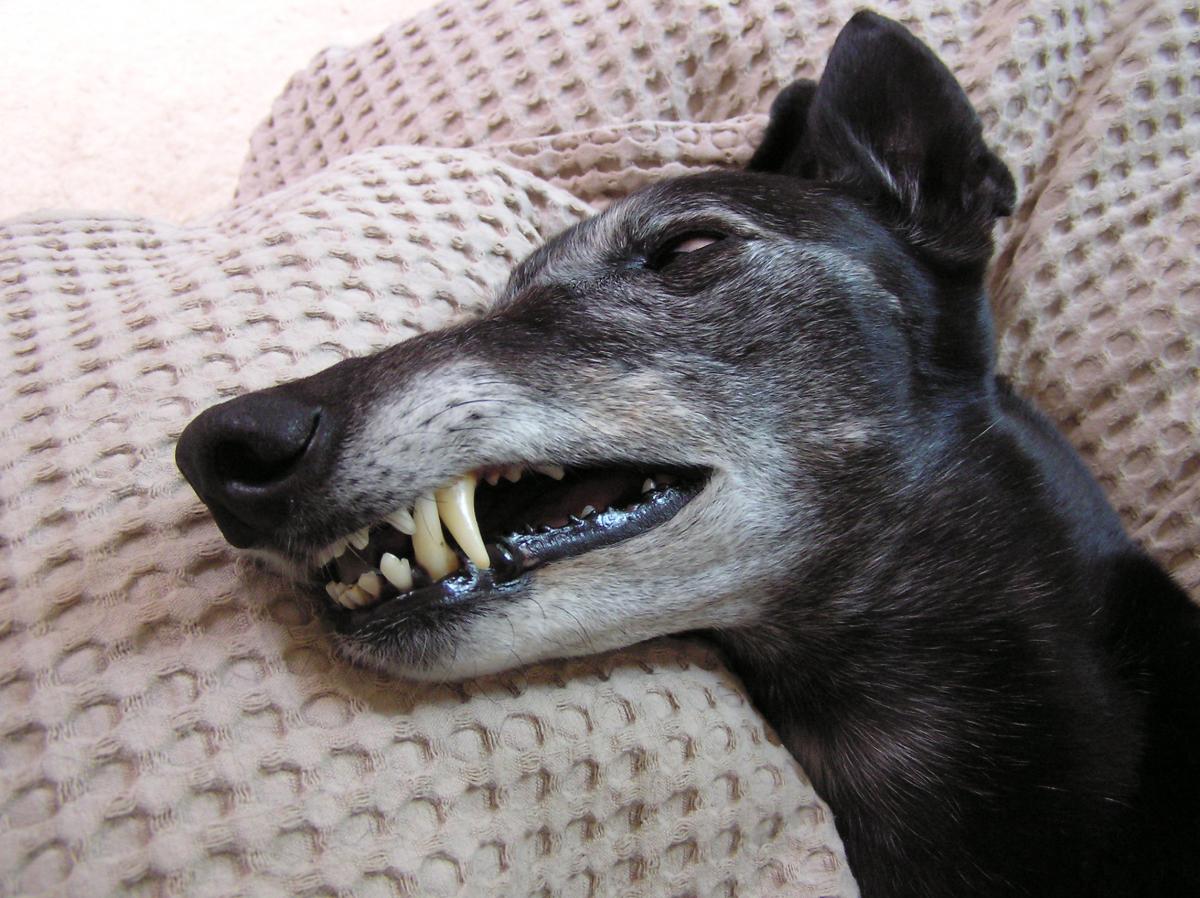 Well, ‘twas the week before Christmas and all through the house……………there was the fragrance of sardines. Lilo is partial to them – one oily one with each meal gives her a glossy coat and a sea-shanty breath.

Being fussy about teeth, I thought that the breath might be due to teeth needing attention. We have a regular dental each year and it was due.

Greyhounds do not metabolise anaesthetics particularly well, especially older ones, so all care is taken with (1) a check-up, (2) a blood test to make sure that she is fit for surgery, (no point in dazzling snappers if one does not make it off the table), (3) an IV to ensure hydration and (4) the softest of blankets on which to recover.

Two extractions, a scale, a polish and a Day-Stay later, Lilo is home flashing her fangs with a television-fit smile. Her sweet breath soon to be overwhelmed with a sardine.  Her Dental Extravaganza was all she got for Christmas, as adding a ten dollar squeaky toy seemed paltry in the extreme !!!!!!!

Lilo had a marvellous Christmas and New Year break.  She tried a variety of sporting poses on her sofa - legs straight up, legs splayed, legs twitching, face under pillow, tongue hanging out etc. 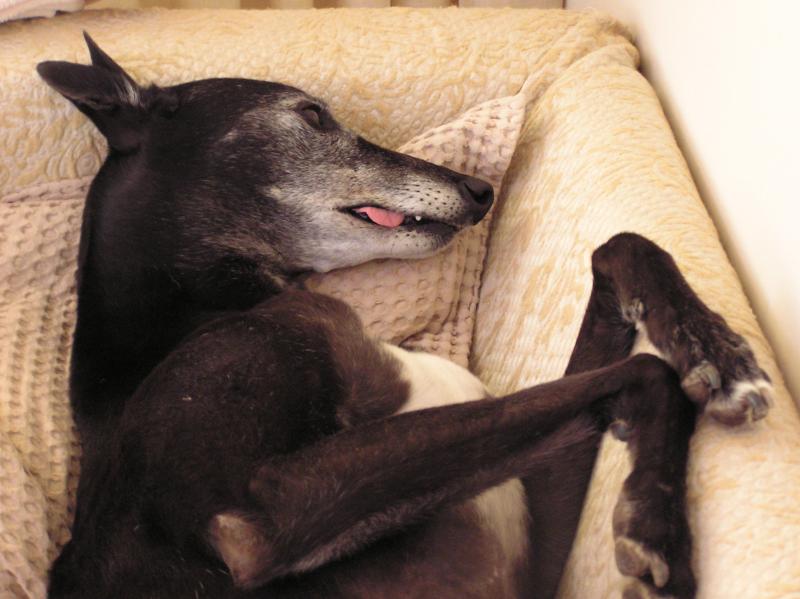 Top of her list of the Best Things Ever was her book:

Comet’s Tale – How the Dog I Rescued Saved My Life

It is the most incredible story of an adopted greyhound which became a service dog, displaying extraordinary intelligence and devotion. Lilo thought it marvellous because she read that greyhounds are not actually lazy, as often described. They are in fact hard-wired by genes from biblical times. These genes ensure that every waking moment is spent in repose, not a muscle twitch wasted, so that when THAT time comes to go from nought to seventy kms in three paces, the colossal stored energy is ready and waiting to fire. Now it all makes sense. 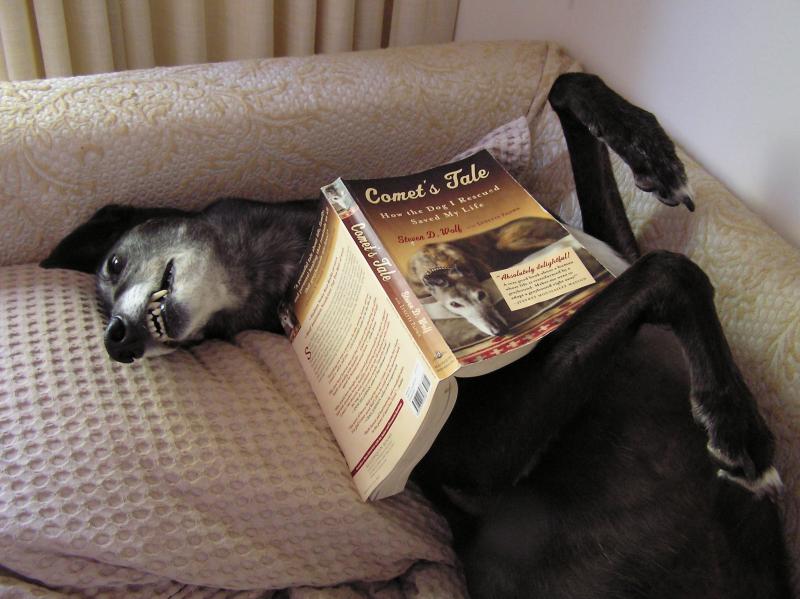 She read that King Tutankhamun, Cleopatra and “even the gods prized these swift and graceful animals”. She learned that they became Protected Royal Canines with the status of Coursing Athlete.

She perused one of the reviews which said, “Both honest and heart-warming, and a wonderful salute to the power of man’s best friend”.

Quite frankly she has been insufferably haughty ever since, not only flashing her teeth but high-stepping, as only those with blue heritage can execute.

Lilo did have a smidgen of competition. A Barbary dove had a two week stay in the bathroom. Found on a busy road and about to be run over. The dove, seemingly uninjured but unable to walk or fly, fully recovered and was released in a known dove habitat. Lilo had one quick look in the bathroom but walked off, with an indignant air, it was all too much and anyway it hadn’t got pearly whites or blue blood like she had. 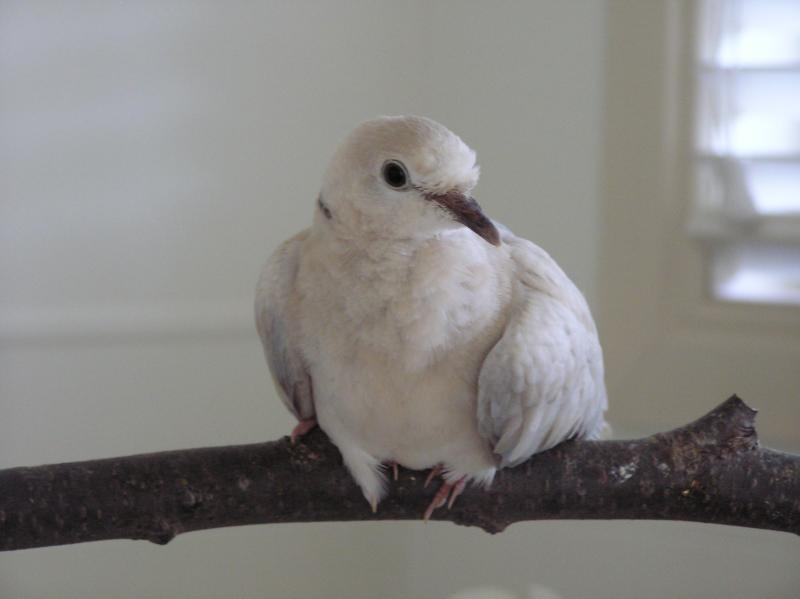 A planned picnic outing was a smash hit.  She sniffed her way through an hour’s bush-walk through Puketoki Reserve, followed by rug spreading at a nearby stream. Lilo lay amongst the cheese and biscuits like a large table centre piece. She spent her time snapping at insects, knocked the wine over, had a biscuit, then went out like a light and snored soundly. All in all, a perfect picnic day. 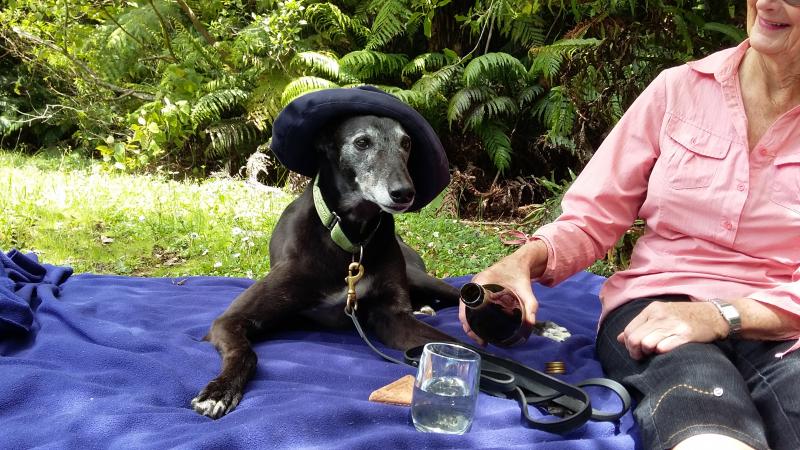 Some days were spent lazing in the garden with friends. 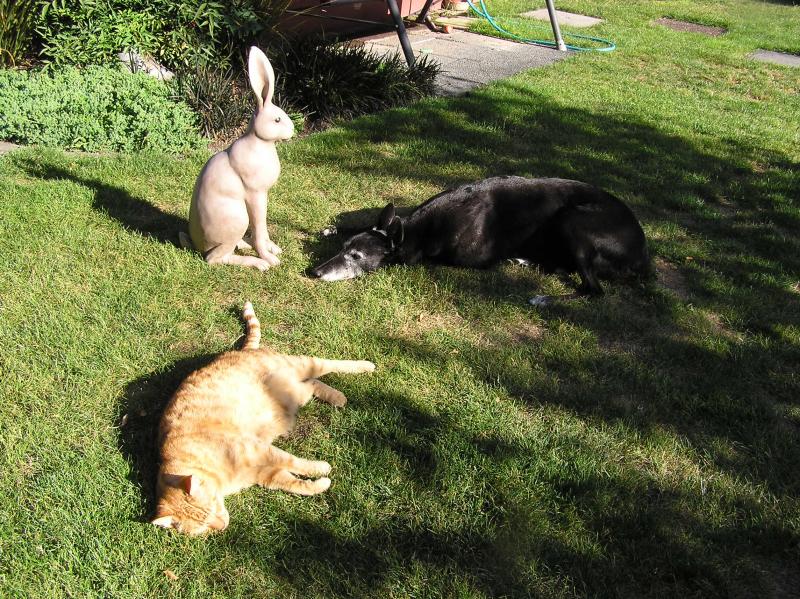 Back to Comet’s Tale and a quote in the book, written by a Greek historian, Arrian in 124 AD:

To this very day the greyhound has clung on to wonderful ancient genes and we are so very lucky to be able to invite them into our lives.

These noble animals deserve to be regarded at the top of the dog kingdom.   Let us hope that in the not too distant future that this is recognised by everyone and that our beloved hounds can live their whole lives in peace and befitting the words of Arrian.