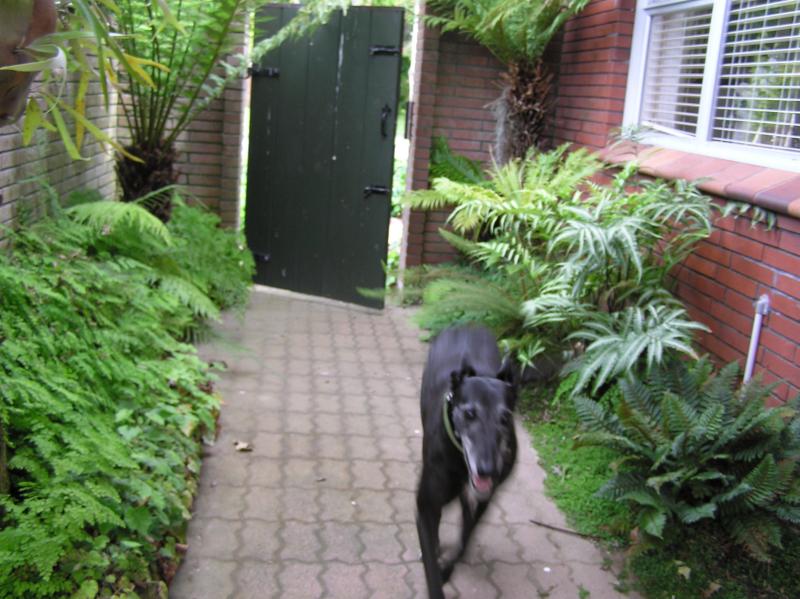 Lilo had settled in. Yes, the perfect child had come to stay.  We proudly went out for walks, the New Kid on the Block was admired and talked about and it was all very jolly. People rightly and wisely advised that until Lilo had bonded well and I could be certain that she would come back to me, it was best not to let her off the lead.

After a few days I could tell that she was longing to have a run and although the garden is medium in size, it is not big enough for a good blast. Someone told me about a softball court which was completely fenced - spacious and safe. So off we went. Left the car in the busy car park, located the court, went in, closed the gate and off she went. Hurtling as if going for her life around the track, she promptly vanished. It was like some amazing magic trick, one second you see it, then you don't.    Poof!    Gone!

How could this be? The court was flat.  I ran, a bit panicky, to the far side. There it was! A tiny side gate - open!  The panic grew, as a busy road was not far away. Running faster than any greyhound, I searched nearby paddocks, a small lake and walkway. No Lilo. Not a sign she had ever been there. Thinking I might have to search the wider Bay of Plenty, I ran back to the car with my empty lead. Who should be standing there, almost at attention, nose pressed to the car door?   Lilo had only been with me a very few days and had never been in the car before.  This was one Brainy Devil.

Two weeks went by and I decided she could be let off again, this time in the local park - she was familiar with it by now, as twice daily walks there was her routine. Going to the far end of the park, muzzle on, we did a few on-dropped-lead recalls (good at home with these), all were obediently carried out.  Then, without warning, One Gigantic Leap for Man-kind and she was off, flying like Zoro through the park with lead trailing, cape-like, behind her.   Poof! Gone!   Again!  Bystanders turned their collective heads as Lilo shot past, leaving an empty horizon.

Unbelievably, she had found my car again in a line-up of cars and was waiting patiently by. I had never driven to the park with her before, but she remembered that we had come by car, not as usual - on foot. (Even I have forgotten that in past years, walking home to find an empty garage - on one occasion the car spent the night locked in the park much to the amusement of my late husband.)

The Runaway Boomerang didn't stop there. My garden is entered in the Garden and Art Festival every two years. Lilo had been with me for just a few weeks when the time came for the garden to be open to the public. It is a very busy few days trying to ensure that everything looks its best. People arrive early in the morning, so Lilo needed a 'dog-walker' as there would be no time for me to give her the morning walk. A delightful school girl, who was experienced with dogs, offered and with instructions NOT to let Lilo off the lead, they went on their merry way.

The first group of people had just arrived and were standing in the fernery, totally absorbed in studying various plants in the peace and tranquillity of my woodland garden entrance.

Suddenly the side gate burst open with a terrific crash and a wild eyed, panting  greyhound came tearing in, scattering the alarmed visitors as she dashed past and into the house. About five minutes later a red faced and somewhat dishevelled school-girl also crashed through the gate. With breathless apologies the poor girl explained that she did take Lilo off her lead and all was going very well until she said, "Well come on Lilo, it's time to go home€. That did it.    Poof!    Gone!  Again!

Naturally,  Lilo had never come home by herself before , but she knew exactly where the good times were and made it safely at high speed across the park, up a bank, down an alleyway, along the road and into a gate she had never used before.

wish everyone and their hounds