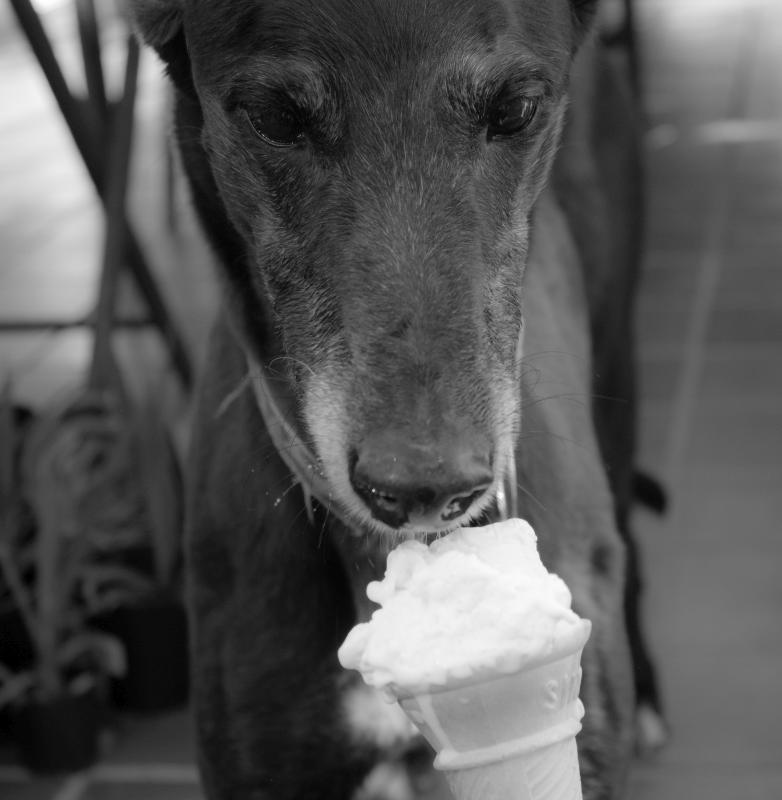 Since I last wrote my parents have moved in to a caravan in our backyard while they wait for their villa at a local retirement village to be completed. They've been with us for a month and Wiz and Lucy have clearly been enjoying daytime company. In fact, I believe that their loyalties may slowly be shifting as I came home from work one night last week to find Lucy curled up on the couch with her head on my mother's lap. At any other time, when she gets on the couch with me, I'm presented with the more dangerous posterior, which inevitably has issues with gaseous substances.

Speaking of posterior issues, Lucy has also delighted us by providing stool samples that have been virtually impossible for us to pick up, thanks a dose of Colitis. Colitis is an inflammation of the lining of the colon, and while easily treatable with a hefty dose of antibiotics it did make her quite uncomfortable for a week or so. It also meant that we were faced with another vet bill and the necessity to purchase heavy-duty poo bags, as, for reasons known only to her, Lucy will only ever aim for the roughest patch of concrete that she can find. I almost took to carrying a water blaster on our walks.

While Lucy was busy being the recipient of special attention and what Wiz perceived as treats (but were really antibiotics), Wiz took it in to his head to be offended and slightly jealous, which resulted in sulky looks, turning his back on us at any opportunity and taking regular trips outside to see what my parents were up to in their caravan. Needless to say, every time he passes the caravan he lives up to his name and urinates on it€¦the same corner, every time. I'm reasonably certain that eventually the entire left hand rear corner of it will crumble away.

My parents are currently away as well - we've been trying to keep the fact that they won't be back for another 3 weeks a secret from Wiz and Lucy as they seem to be pining a little bit at the moment and they are certainly looking for them as well€¦it seems to be a cause for some concern for both Wiz and Lucy that they have apparently vanished without trace. Having said that, my father did call in on Friday night and the welcome he received from both of the hounds was, to put it simply, offensive. We are the ones who feed them, walk them, pay their vet bills and let them on to the bed of a Saturday morning and yet they think that being turncoats at the drop of a hat (or beefy treat) is acceptable behaviour.

There has been some evidence of truly acceptable behaviour though as once again we helped out at the local SPCA Open Day and this year Wiz chose to refrain from barking at the Llama. Last year he did - it was the first time that we'd heard him bark and, as it happens, he actually has a very large and noticeable bark, particular when it reverberates off the trees at the SPCA, startling small children, terrifying kittens looking for a good home and making parents wonder whether there is a dog the size of Texas available for adoption.

The SPCA Open Day is something that is always enjoyable for the hounds though as free love from passing strangers abounds€¦not to mention free sausages if you're clever enough to request the last volunteer shift of the day. This year though it was excessively dry and hot and both Wiz and Lucy (as well as the other hounds in attendance) were all exhausted by the time they got there. It was still a good turn out though and applications to adopt were made, even after people had seen a selection of local Greyhounds slowly sweating away to nothing.

There's also been the opportunity to attend two group walks for our local hounds, the first of which was held at Shirley and Derek Birts new residence. As the property is excessively large (and out in the country), this was less of a walk and more of a "free range rampage€ for the hounds. It did include a guided tour of the property, which quickly turned in to an episode of Bear Gryll's "Running Wild€ as we all managed to get separated and lost on the "bush walk€ section of the property. Luckily for us, the dogs all knew the way back to the main section of the property; although I believe that this was because a rabbit or two had been seen on the lawn outside the house.

The second walk was held in the usual location of Pukekura Park in New Plymouth and was a good opportunity to meet some of the newer hounds in Taranaki, followed by a gentle amble around the park for an hour or so. Lucy detests walking on gravel and will take her time, trying to pick out the smoothest available course through much of the park. This does giver her the time to stop and really enjoy all the available smells though - and when Lucy stops to sniff she will invariably 'freeze' and become an immovable object until she decides that it's time to move on.

At all of the walks the hounds are of course incredibly pleased to see each other. Wiz certainly doesn't hesitate to get into the thick of it when we first meet up, dragging us into a chaotic snarl of leads, legs and owners in his frenzy to reintroduce himself to his long lost friends. I think what they really enjoy about walks at the park is the ice cream in a cone at the end of the walk, and as there was no shop at Shirley and Dereks house Jenny and Dennis Putt thought ahead and bought a container of ice cream and some cones out with them€¦not that the hounds are spoiled though€¦not in the least

The heat over the last few months has really seen Lucy struggle and she has been declining the offer of some of her evening walks - and if we haven't been out for a walk by 7 in the morning during the summer then it's too late for Lucy.  As I type we've just come back in from a walk and both Wiz and Lucy are comatose on their beds. They probably won't stir again until about 9.30 tonight and I'm happy to let them be. After all, while they're sleeping the sleep of the truly exhausted it means that we can sneak out for diner at a restaurant€¦

Greyt news! Our GAP Events Team is Getting Bigger with New Volunteers in Canterbury and Auckland.
THE GIANT CATERPILLAR CRAZE!
TRAINING YOUR GREYHOUND TO COME WHEN CALLED
END_OF_DOCUMENT_TOKEN_TO_BE_REPLACED