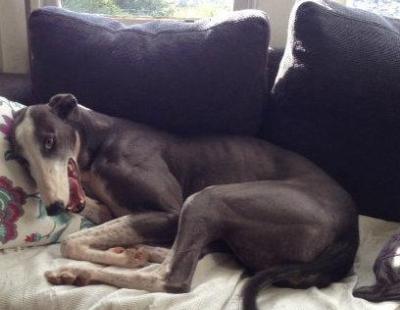 Hamish and I had a bit of a wait to find a suitable dog for us, as we both work fulltime and have three cats in a small villa on a typical steep Wellington section. Luckily Emmie came along, and she has proven to be perfect.
Emmie hadn&rsquo;t been tested on stairs before we adopted her (Irene&rsquo;s comment when we picked her up was that she seemed fairly agile), so when we got home from Sanson we held our breath at the top of the 46 down to our house. Thankfully she waltzed down them like it was no big thing, and even managed the wooden stairs off our veranda. It took a little trial and error for us to find somewhere in our back yard where she was happy to toilet, but that was soon enough sorted.
Given that Em was new to living in a house we followed Sally&rsquo;s advice to the letter. We kept her off the sofa for the first couple of months and supervised her interactions with the cats. Our Burmese kitten quickly worked out that she had nothing to fear, and it has been incredibly cute watching the two of them trying to work out how to communicate. Bergamo will run through the cat door, spot Emmie, and walk towards her with her tail in the air, with a typical brash Burmese meow of greeting. Emmie will then follow her around sniffing at her for a while, and Bergamo will wind her way between Em&rsquo;s legs a few times purring. Em has even tried to get her to play, but funnily enough the sight of a 30kg dog play bowing, thrashing her tail around and barking hasn&rsquo;t inspired Bergamo to try to respond. She has started taking a few play swipes at Emmie though, and has bounded up to her sideways a few times. It would be terrifying to watch if Em had ever shown any hint of regarding her as prey.
The other two cats have decided that the large dog is best ignored and will happily come inside when all is quiet &ndash; especially when Em is hanging out on her favourite bed in the study. We&rsquo;ve even hit the jackpot of three cats on the bed and Emmie asleep on the bedroom floor a few times, though it doesn&rsquo;t exactly make for a good night&rsquo;s sleep!
Personality-wise Em is an angel and has earned her place on the sofa. She won&rsquo;t get up on our bed when we&rsquo;re home unless given permission, but she does make a nest for herself there when she is home alone. Thankfully, like most greyhounds, she doesn&rsquo;t smell terribly doggy!
After an initial beginning as an office dog Em now prefers to spend her days asleep at home, being fussed over at doggy daycare or out on jobs with Hamish. We are lucky in that there are lots of great places to walk her nearby and where she can run offleash - not that she ever runs for too long as she is very much retired. On greyhound playdates she is a chaser, not an initiator unlike her friend Lottie.
On only her second day at home Em was being interviewed for an article on pets and the money their owners spend on them in the weekend edition of the Dominion Post. As a result Em is well-known in the neighbourhood. She just loves people and is good with children, which is just as well given the number of people wanting to stop to pat her. We thought she was incredibly docile and well-behaved at first, but of course as time has gone on her personality has really opened up and she has become much more cuddly and playful. Just this last week she has discovered toys. A greyhound getting excited over a stuffed toy can be quite a handful in a small villa with wooden floor boards!